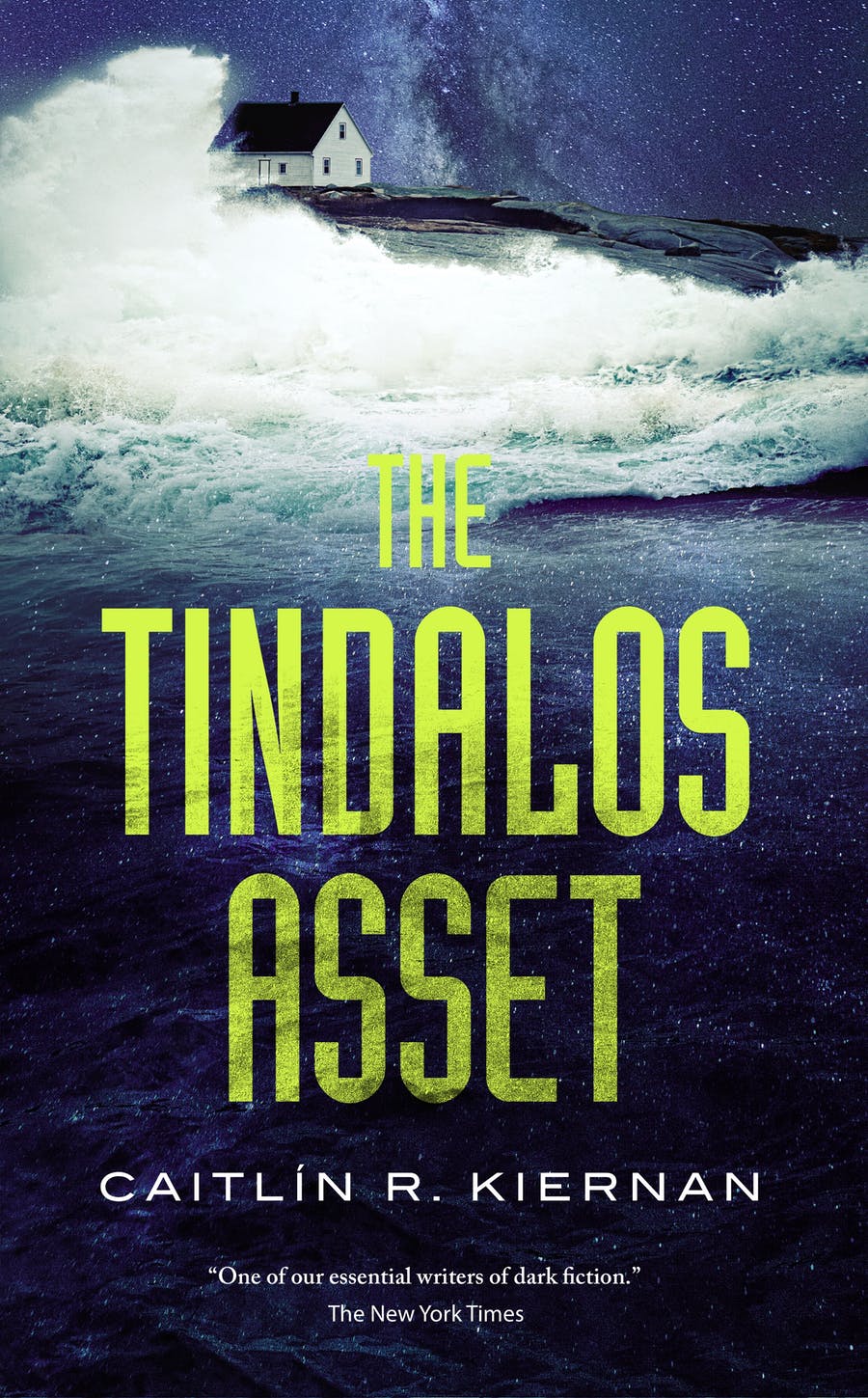 Caitlín R. Kiernan’s THE TINDALOS ASSET is the third and final novella in the TINFOIL DOSSIER trilogy, a fitting bookend to their confidently wild portrayal of mostly scumbags trying to reign in — or perpetuate — horrors both otherworldly and extra-dimensional. Like the other two novellas, it’s an absolutely wild ride of clipped thoughts, traumatic events both past, present (and some future), all occasionally interrupted by bouts of depravity.

THE TINDALOS ASSET returns to The Signalman, the binding character of the series, while spending much of its time in other Dreamland agents’ heads. In several ways, both in setting and inciting events, TINDALOS feels smaller in scope, far more than the epic, wide-ranging state-of-the-world relayed via the second book in the series, BLACK HELICOPTERS. That feels strange to say, given that TINDALOS is centered around very apocalyptic events, but it primarily takes place in only three locales: a hotel room, and airplane, and by a body of water. Between the limited locations and the amount of exposition and dialogue expelled between the major players, TINDALOS often comes across more like a stage play, as opposed to the unseeable weird fiction it is.

That TINDALOS feels more insular and focused more on the headspace of its characters and their actions and motives, and this approach is to be applauded! Each act in this grand work has its own texture, its own litany of surprises. Don’t enter weird fiction hoping for more-of-the-same with every installment, because if you do? You should find a different genre.

After reading AGENTS OF DREAMLAND I noted: “To riff on the ‘it’s not a season of TV, it’s a 12-hour movie’ sentiment, the TINFOIL DOSSIER series is not so much three novellas, but a three-part novel.” I wish I’d taken my own advice and binged the novellas like a season of TV. Reading the three novellas over the period of a few months under a year proved to be too spread out. To those who read these as they first appeared, especially those who followed it via piecemeal through anthologies and the like, I salute you. I wish I’d read them all in one big gulp, but in time — instead — I’ll simply re-read them, hopefully shortly after being told the release date of a TINFOIL DOSSIER film or TV adaptation. 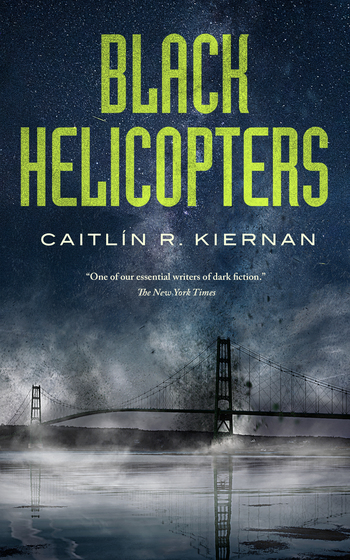 BLACK HELICOPTERS is the second in Caitlín R. Kiernan’s TINFOIL DOSSIER trilogy. I wrote about the first part, AGENTS OF DREAMLAND, in September 2021 and, upon starting BLACK HELICOPTERS, imagined it’d be narratively and stylistically in the same vein.

That was a poor assumption to make.

AGENTS OF DREAMLAND is very weird, but its high-concept, futurist Lovecraftian ideas are told in — relatively speaking — more conventional storytelling terms. I’ll briefly say that both books deal with scientific hubris, parapsychic humans, outer world threats, and the fear of the unknown.

BLACK HELICOPTERS sees matters escalate wildly, both concerning in-world events, how humanity reacts to it, as well as Kiernan’s approach to the material. It’s wildly fragmented and opaque, racing through dialogue and internal monologues and depictions of the unearthly, never stopping to explain itself. There are numerous exchanges in French that are never translated to the reader when reading it, and the reader is not given enough context to quite make sense of it. (That said, translations are available at the end of the book, but in a way that matches the tone and experimental style of the rest of the novella.)

BLACK HELICOPTERS reads like a fresh, modern, queer fusion of weird fiction filtered through a MONDO 2000 mindset. It expects a lot from the reader and, given how brilliant and multifaceted Kiernan is, you’ll almost always be falling below her expectations, but that’s okay! It’s so smart, so vibrant, so unique both in voice and setting and exploration that you will feel compelled to continue reading, even if you’re completely and utterly bewildered.

I mostly know of Cherie Priest as a steampunk novelist, but THE TOLL is one wild, southern gothic weird fiction tale. It kicks off with newlyweds Titus and Melanie driving to honeymoon in the Okenfenokee Swamp. They drive over a bridge and then Titus wakes up, prone, outside his car. Melanie is nowhere to be found. He ventures to the nearest town, Staywater, for help, and matters only get stranger.

Priest peppers her characters with plenty of verve, especially two older sisters who happen to be two extremely badass geriatric witches. If you scrutinize the events and actions, it doesn’t exactly hang together, and the conclusion might feel a tad unsatisfying depending on what you expect, but the journey is a damn rip-roaring time.

I first read Caitlín R. Kiernan via their excellent weird fiction tale THE RED TREE, and recently read praise for their novella AGENTS OF DREAMLAND, the first in a Lovecraftian/SCP Foundation-adjacent trilogy called TINFOIL DOSSIER. Upon finishing it, I was impressed by how stylistically it differs from THE RED TREE, and how ornate it is while being immensely agreeable. The novella consists of multiple point-of-views regarding a mysteriously horrific incident that involves a cultish leader.

While AGENTS OF DREAMLAND intriguingly sets up the crisis and builds out the agency investigating the issue, it’s slightly disappointing that it’s ultimately a prologue, and fizzles well before the end. While I’m excited to read the rest of the trilogy — the last in the series was published in 2020 — DREAMLAND doesn’t quite satisfy as an individual work. I will fully grant that I should not expect it to — while I haven’t read the other two books, I believe it functions exactly as Kiernan intended — however, when I initially tucked into it I didn’t quite realize that was the goal, and felt slightly disappointed with the conclusion.

To riff on the ‘it’s not a season of TV, it’s a 12-hour movie’ sentiment, the TINFOIL DOSSIER series is not so much three novellas, but a three-part novel.