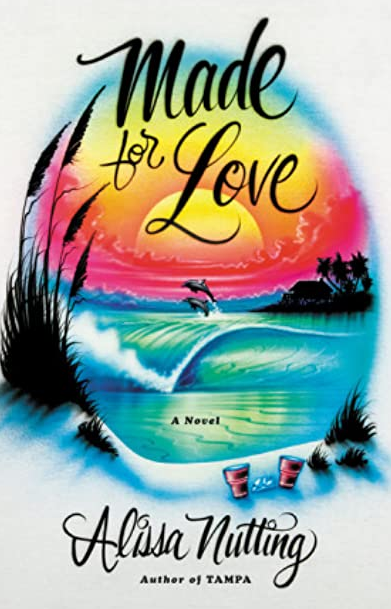 I love adaptations. Part of it’s the writer in me, as I love to scrutinize how a work is transformed to fit a different medium. However, truthfully, most of it boils down to the fact that, as a youth, my parents wouldn’t allow me to watch anything racy or violent or swear-laden so instead I simply read the novel adaptation of a PG-13 or R-rated film instead which, as you might suspect, played fast-and-loose and often were far more taboo than the source material.

That said, a lot of modern adaptations disappoint me. (To be clear, we’re mostly talking about comic/novel to film/tv adaptations, because the heyday of film-to-novel adaptations has long passed.) They often hew too closely and lose their luster, or go wildly off-the-rails. Rarely is there an in-between.

I first watched MADE FOR LOVE and loved it and immediately ordered Alissa Nutting’s 2017 novel of the same name, curious as to how they’d handle the interiority of runaway wife Hazel Green. However, given how thrilling plotted and substantial the series was I figured they mostly followed the novel’s template and goosed a few scenes to play better visually.

That is not what they did. Instead, showrunner Christina Lee (SEARCH PARTY) enlisted Alissa Nutting (who also wrote the controversial novel TAMPA) to join the writers room and run with the core concept of Nutting’s novel: a desperately unhappy wife Hazel Green decides to leave her brilliant-but-psychopathic billionaire tech mogul Byron Gogol upon being told of his plan to ‘merge their minds together’ via a chip implant in her head. Hazel breaks free of his isolated work compound, leaving all of her belonging and any money behind, so she has no option but to crash at her widower father’s trailer home. Shortly after being introduced to her father’s partner — a sex doll named Diane — she realizes that Byron had already implanted the chip in her head.

So far, the source material mostly mirrors the adaptation, however, this is where it slowly starts diverging. Since I’m comparing and contrasting the two — I have yet to watch MADE FOR LOVE season two, so this will only refer to the first season — I’ll be noting specific plot points and character traits for both the series and novel, so if you want to go in blind, best circle back to this later. If you just want to know if it’s worth reading the book, regardless of whether you did or did not watch the show, I implore you to do so.

The first sign that the show is its own creature is that: in the novel, her father has to use a Rascal mobility device to get around, whereas in the show he’s very mobile.

The second sign is how the book handles Liver, who on the show is a handsome twenty-something working at a local bar, brewing beer at night, outside, shirtless, arms covered in foam up to his elbows. In the novel, he’s has forty years on Hazel, and they quickly fall into a very friendly, physical relationship, partially due to the fact that they’re cranks.

The third sign was that I kept waiting for Alissa to add a possibly more sympathetic side to Byron, even if it feels like he was pretending to do so — akin to the show. However, he remains a monster all the way through.

Similarly, Hazel is fleshed out a bit more and comes across as smarter and more aware than she is on the show, but also has an array additional issues that lead to her living life as a fuck-up.

There are also some minor changes with how Byron can access Hazel’s experiences. Unlike the show, where he has a direct live feed 24/7, in the novel he downloads them once every 24 hours, which significantly alters the tension dynamic.

Most importantly, while dolphins factor into the novel, they do so in a wildly different manner, and feature a con-man Jasper who hooks women into his orbit, bleeds them dry and moves to another town. At first it feels completely unnecessary, but Alissa manages to weave it all together in a smart manner. I do wonder if they may touch upon that in the second season (which I have yet to watch).

Lastly, the endings of each could not differ any more, but both are quite satisfying within the context of each work. (I’d argue the end of the novel would work as the end of the first season, but not vice versa.)

While the show is an amusing thrill ride that happens to examine human desire, tech and surveillance culture, and more, the novel touches on all of that but is mostly concerned with Hazel and Jasper’s personal journeys and growth, of reckoning with guilt and poor decisions, all while trying to figure out what they want their lives to look like. Both are vastly different and both have a lot that they want to say, and both are worth your time.

Given that I was both a computer nerd and practicing cellist as a youth, I’ve seen this film more than a few times over the years. Yes, its portrayal for what a mid-1980s computer was capable of doing was wildly overblown, but it had a fantastic soundtrack — as you would expect as it’s courtesy of Giorgio Moroder — and was extraordinarily shot. It has a number of lush scenes that highlight the difference between video and film, as well as a more than a few fantastically composed visual vignettes, and Madsen is absolutely charming as Madeline. It certainly was one of the first narrative films that ‘spoke’ to me, that made me feel seen, given that it was both about computers and a cellist.

The film features a musical number where Madeline warms up by playing Bach’s Minuet in G Major (what the ELECTRIC DREAMS soundtrack dubs as the ‘Mad Minuet’), which was one of my warm-ups when I was a young cellist so I can’t help but love it, but I also adore how long and -fun- the scene is. I was never a brilliant cellist — although I was good enough to be in a quartet to play for then-Vermont governor Howard Dean — but when I got on a roll, when I was in the zone, it felt just as exuberant and gleeful. You can view the number below:

ELECTRIC DREAMS has been unavailable in the U.S. for some time now, but there was a recent UK Blu-Ray release via Second Sight (https://secondsightfilms.co.uk/products/electric-dreams-blu-ray ). There’s also a copy floating around YouTube that I may have already ‘accidentally’ linked to. (Shh, don’t tell!)

P.S. There’s a great post-mortem about the film available on YouTube. And, for what it’s worth, there are two scenes I remember vividly from watching it as a youth: the motherboard being washed out, and Madeline’s cello being crushed in the elevator. Madsen’s method time was worth it.