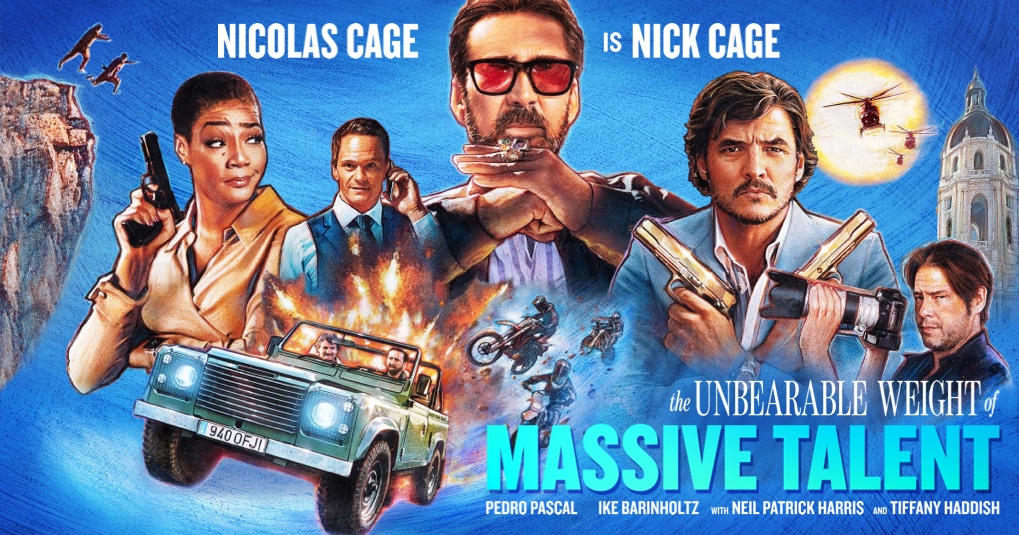 Making a meta film like THE UNBEARABLE WEIGHT OF MASSIVE TALENT, which centers around Nicolas Cage playing himself struggling with his acting career, can’t be an easy task. With such a long legacy of films, such a wide breadth of performances, not to mention Cage’s real-life idiosyncrasies and quirks, it seems foolhardy to try to convey the essence of Cage in under two hours. A serious-minded theme park might be more fitting.

If Tom Gormican and Kevin Etten, director and co-writers of UNBEARABLE WEIGHT were daunted by Cage’s oeuvre, it doesn’t show on the screen. Nicolas Cage is ‘Nick Cage’ who, apart from the name, barely deviates from his real-life counterpart as a quirky, intense, occasionally explosive, but extraordinarily compelling actor, known for his dedication to his craft.

‘Nick’ hits rock bottom after he fails to garner a meaty award-contending role and he declares to his agent (Neil Patrick Harris) that he’s quitting acting, but not before he takes a million dollar gig to make an appearance at an overseas birthday party. Unbeknownst to Nick, the party is a ruse by rich drug lord Javi Gutierrez (the always delightful Pedro Pascal), a Nick Cage superfan who has penned a script just for him, and hopes that by the end of the party Nick will attach himself to the film, and maybe — just maybe — Nick will also become his best friend along the way.

What follows is a pleasurable, occasionally visually kinetic, but very over-stuffed romp across the broader beats of action films that would have featured Nic Cage front-and-center. There’s a lot of sun, surf, sports cars, and high-speed shoot-outs, all peppered with riffs on Cage’s more off-beat roles, such as a few ADAPTATION-esque combative discussions with ‘Nicky’, his wild at heart younger self.

There’s an effortless charm to UNBEARABLE WEIGHT, partially because of the drugged-up interplay between Nick and Javi, but also because of how hard the film leans into Gormican and Etten’s favorite Cage films, adroitly adapting the beats of the likes of THE ROCK and CON AIR to a somewhat sweet bromance (and includes a slightly more problematic, but still very 90s ‘reconnect with my estranged ex via violent set-pieces’ subplot).

Some may be disappointed that UNBEARABLE WEIGHT doesn’t zig or zag as much as it could, or that it doesn’t subvert Cage’s persona say, in the way that JCVD (2008) lifted the curtain on the ennui of a similarly fictionalized ‘Jean-Claude Van Damne’. However, Gormican and Kevin Etten made this film to extoll Cage and recreate the glow his films exuded, and their script — plus the earnestness that Cage brings to the role of err, himself — sees them warmly meeting that goal.