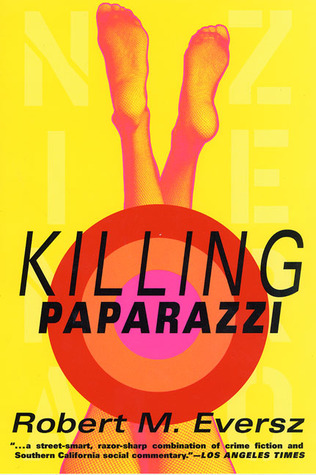 (This was originally penned July 6th, 2021 for a platform other than this website.)

A writer friend recommended Robert M. Eversz’s KILLING PAPARAZZI to me, knowing I have a taste for noir and detective fiction, especially if it’s lurid and moves like a freight train, and KILLING PARAZZI does not disappoint. It’s my favorite neo-noir I’ve read since Megan Abbott’s QUEENPIN — my favorite neo-noir novel ever — one that I found to be a revelation, but that’s a story for another time.

First things first: my friend did not note that this was the second novel in Eversz’s NINA ZERO series, so it took a bit before I could really get a bead on exactly what the protagonist had done to be incarcerated. The events of the first novel are doled out in a trickle, but you eventually get the whole picture (and the following paragraph will help you along without major spoilers, just in case).

KILLING PAPARAZZI features Nina Zero — née Mary Alice Baker — as she’s getting out of prison in the early aughts for killing several men and accidentally blowing up part of LAX. One of the first things she does upon parole? A green card wedding to an unknown Englishman named Gabe. They have a fun night in Vegas, but she realizes she could fall for him and also realizes he could fall for her, so she darts back to her home city, Los Angeles, buys a used Cadillac and a camera, and starts using her streetsmarts to work the paparazzi beat.

A week later, she happens upon the scene of her husband’s murder, floating in LA’s finest drinking water, and finds herself wanting revenge.

It’s pulpy; it’s penned with a clipped terseness that I can’t help but adore; it traffics in L.A. lore; Nina’s an angry misfit, smart, funny, resourceful, and down for more than you might initially expect. It’s absolute catnip for me, and an enthralling read.

I don’t read many biographies, but this one interested me because, come on, it’s Vampira. If you aren’t familiar with Vampira, well, here. She was literally the proto-Elvira (more on that in a bit). However, Maila was also the nexus of a certain part of late 40s/50s Hollywood, something I didn’t know at all.

I knew this was a bio from a blood relative, from Maila’s niece Sandra Niemi, so I was skeptical as to some of these stories which, admittedly come from Maila’s own pen, but uh, there are plenty of photos and pre-existing proof. Maila knew misfit talent when she saw it — herself being similarly minded. While the bio is a bit clunky, it’s stuffed full of stories that entertain and enthrall, and paint the picture of a very complex woman, a woman with a brilliantly creative, often hilariously filthy, mind. Sadly, she was often mercurial, and her luck was rotten and, despite everything she gave to the world and her friends, she often lived in poverty, because it’s fucking Hollywood.

I do want to underscore that, despite all of the stars that pop up, it’s very much a story about deviants and misfits trying to get by in Hollywood. It’s a classic Hollywood tale, but not the classic Hollywood tale most want to hear. But hey, if you’re a goth and you want to know where your media roots stem from, you should read it.