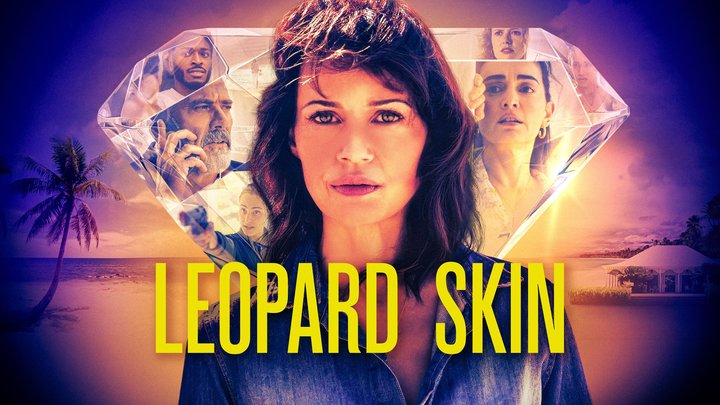 (Peacock) LEOPARD SKIN is an eight episode limited series from Sebastian Gutierrez, perhaps best known for the recent neo-noir series JETT or for the cult comedy ELEKTRA LUXX or a little joke of a film named SNAKES ON A PLANE, depending on the kind of person you are. (I fall in the first camp.)

JETT was known for its supremely hyper-stylized lighting and framing patchwork — segmenting the action to heighten tension as well as to just look cool. As you might imagine, it owes a great deal of debt to Steven Soderbergh’s adaptation of Elmore Leonard’s OUT OF SIGHT with a dash of WILD THINGS. Tellingly, Gutierrez also wrote an episode of the short-lived Karen Sisco spin-off of the film where THE HAUNTING OF HILL HOUSE’s Carla Gugino played Sisco. (It’s worth noting that Gugino and Gutierrez have been entangled for quite some time.)

At first blush, LEOPARD SKIN appears to be a conventional heist-goes-wrong: three ruthless strangers are blackmailed into stealing millions of dollars worth of diamonds by a corrupt judge (an isolated Jeffrey Dean Morgan). They get the diamonds but shit goes sideways, their driver gets shot during the getaway, and they end up at the doorstep of a mansion occupied by an ex (Gugino) and a widow (Gaite Jansen), and the ex just happens to have footage of the widow killing her ex and then blackmails her by requesting that she becomes subservient to her every want.

In other words, it’s all about knowledge, power and sex.

While JETT was dreamlike, LEOPARD SKIN comes across as Lynchian in fashion commercial mode: overly visual and sumptuous, but often also stilted and performative in all the best ways. This is a show that should not exist, and the fact that it’s only available to stream via Peacock is even more mind-boggling, especially since it’s clear that this was not their intended network as the show is not paced for ad-breaks but yet has some of the most disjointed and abrupt ad-breaks, lending an even more surreal atmosphere to the show.

The always-brilliant Kayla Kumari Upadhyaya succinctly stated that “Carla Gugino and Gaite Jansen manage to bring nuance and velocity to a story that doesn’t ever seem to know what it’s doing or why.” LEOPARD SKIN feels groundless but is more interesting for being so. It’s an enigma wrapped in a riddle and is so confounding that you’ll either fall completely in love with it or you’ll find it to be pretentious softcore twaddle. Hopefully, like me, you’ll find it to be the former, but buyer beware.