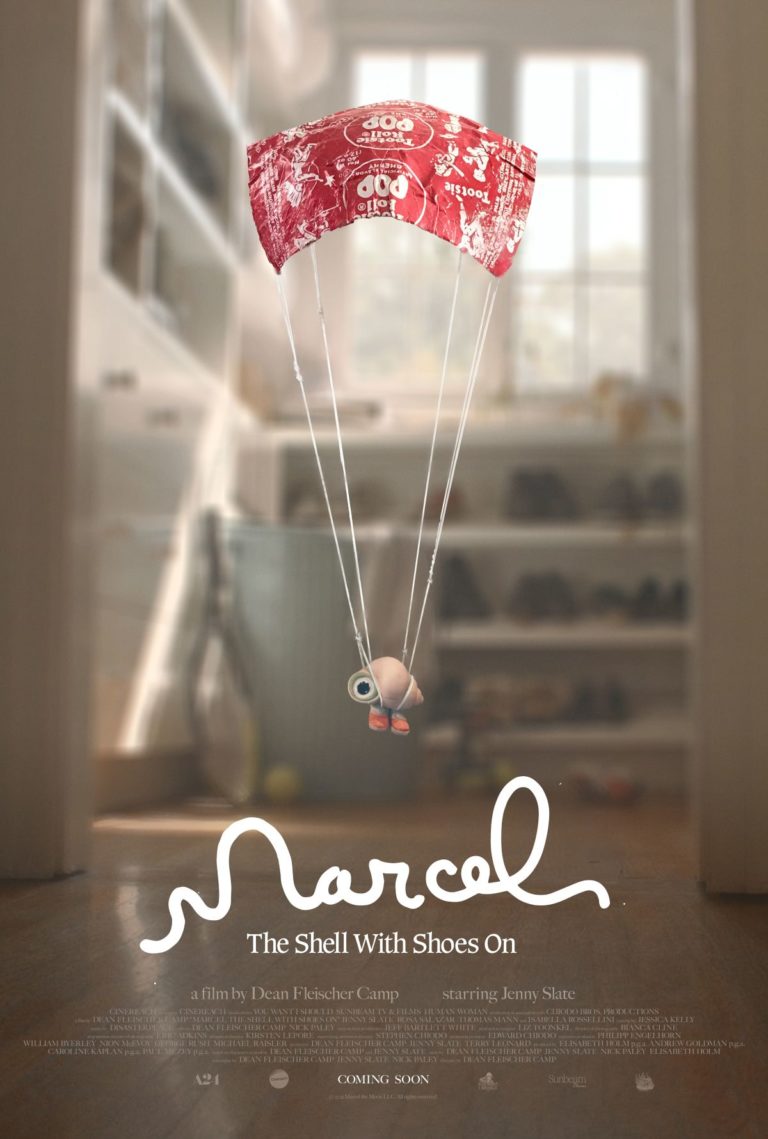 MARCEL THE SHELL WITH SHOES ON, a stop-motion animated film from Dean Fleischer-Camp about a sentient shell that wears shoes could be yet another epic film in the Pixar vein, of an outsider thrust into the unknown to find their own community and the adventures they encounter while doing so.

Instead, it has more in common with smaller scale documentaries, such as the idiosyncratic GREY GARDENS, which shines a light on an off-beat mother and daughter inhabiting their dilapidated ruin of a home and how they eke out their existence.

MARCEL builds on the shorts that made the character internet-famous in the early 2010s — essentially, that of documenting the life of Marcel the shell (voiced by Jenni Slate) living in a house with his nana Connie (voiced by Isabella Rossellini). The house they find themselves in is far larger than they need but it’s what they have, so they make the most of it while waiting for the next episode of 60 MINUTES to air so they can see fearless Lesley Stahl report on the latest notable of the prior week. Said house is an AirBnB, and apparently no one ever really takes note of them until the lonesome Dean rents out the space.

Dean ‘discovers’ Marcel and Marcel’s nana, and proceeds to film how Marcel manages to exist in this space that is not built around their needs, and he also details the circumstances that put Marcel and his nana into this place, namely:

A couple inhabited the place for a while, and they frequently argued. Whenever these outbursts would occur, whenever Marcel’s family would hear strife, they’d collectively meet in a drawer. This one last time though, one half of the couple went to collect their things, which also meant collecting all but Marcel and Nana, and they rushed out the door with Marcel’s family.

A more mainstream film would have turned this tale into Dean embarking on a cross-country trip to re-unite Marcel with each and every family member. Instead, Dean drives to the highest point in L.A., all while Marcel repeatedly gets roadsick, neither learning much of anything during the afternoon jaunt.

Despite being told in miniature, Marcel and MARCEL have high aspirations, but both are small voices, and both are better for it. This is a quiet film, both in tone and in scope, but it confidently speaks volumes. It’s a work about ennui and minor victories and emotional stumbles while also being about longing for an accepting crowd. It’s a melancholy, complicated film told simply, one that’s destined for cult status, simply because it defies tonal categorization or, perhaps, because it’s so cute, so initially innocuous, while ultimately being a measured existential tale, one so immaculately put together in a way that will almost certainly have you smiling through tears.