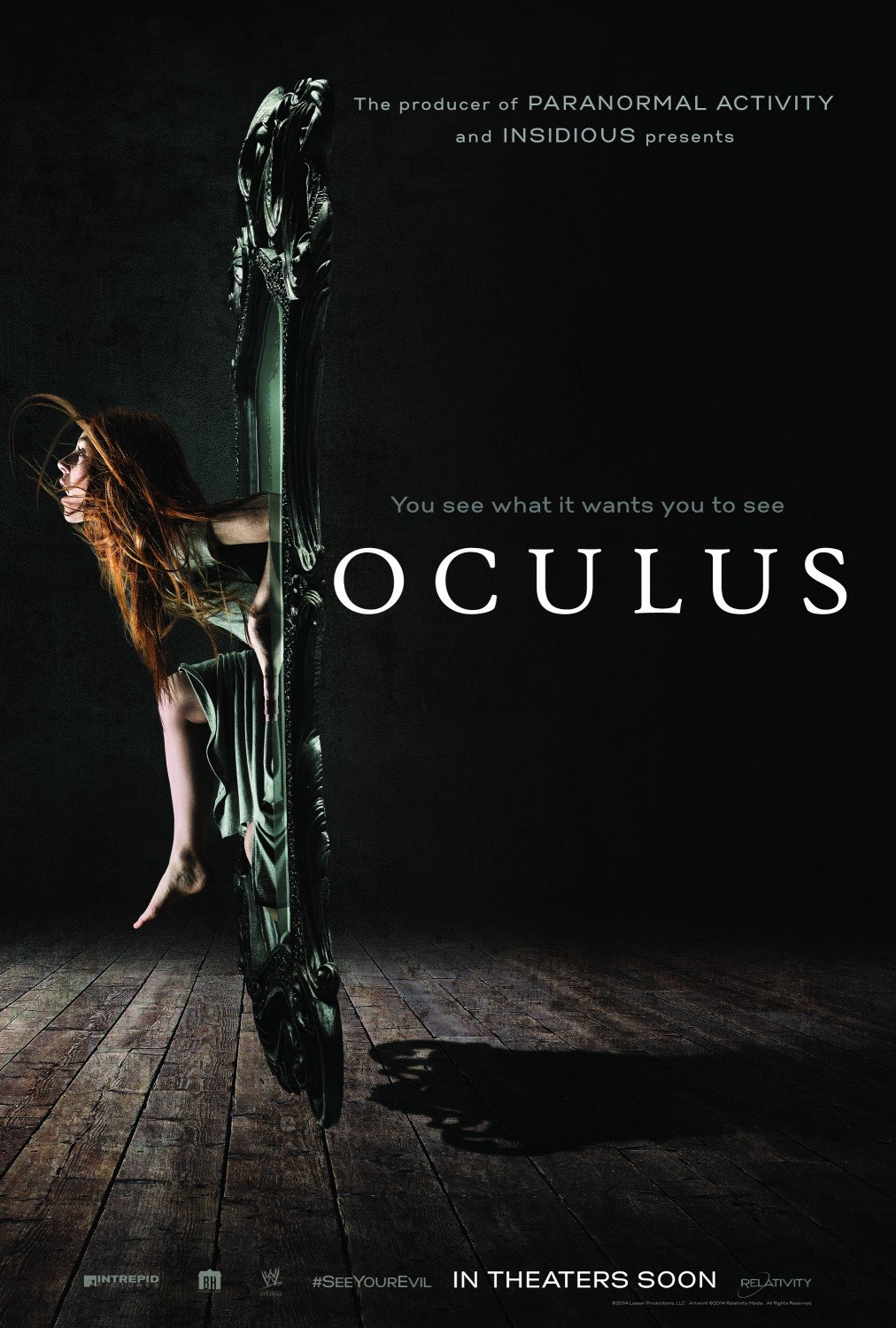 (Hulu/freevee/Pluto/tubi/VOD) I find Mike Flanagan to be a frustrating creator. He’s very clearly a sensitive, empathic person and he has a familial perspective that surprisingly rare nowadays. While I haven’t read the King novel that GERALD’S GAME is based on, I found it to be an exquisite one-room thriller. On the other hand, I found THE HAUNTING OF HILL HOUSE — a well-executed horror mini-series — to be a severe distortion of Shirley Jackson’s original work, one that serves Flanagan’s themes instead of Jackson’s.

OCULUS, despite being Flanagan’s theatrical debut, is exceedingly confident with its themes and how it explores them. The surface-level premise starts with a prototypical family in the 90s consisting of husband Alan (CSI: MIAMI’s Rory Cochrane), his redhead wife Marie (BATTLESTAR GALACTICA’s Katee Sackhoff), pre-teen daughter Kaylie (redhead Annalise Basso), and adolescent son (Garrett Ryan). Alan buys an antique mirror that possesses both himself and Marie. He ultimately chains Marie up while ignoring the rest of the family until he ultimately kills Marie, has a moment of clarity, then forces his son to shoot him before he can do any more damage.

Newly orphaned, Ryan (now played by Brenton Thwaites) is institutionalized for years, while Kaylie (DOCTOR WHO’s Karen Gillan) floats around, spending her time trying to track down the mirror. She finally finds it and, when Ryan is finally given a clean bill of mental health and released, she pitches him an elaborate plan to destroy the mirror, to destroy the entity in it, forever.

In other words: it’s comprised of Flanagan’s major recurring themes: fractured families, brothers and sisters coping with loss and hurt and trauma, psychotic breaks, and obsession. You might be inclined to include addiction — Marie being chained up, Alan ignoring the world to the point where his children have nothing to eat — but I’m not completely confident in claiming that.

There’s another way to read the film, of course. This a work explicitly created around uncertainty of vision, of the reversible image of mirrors. I’ll keep my reading deliberately vague as to not lead potential viewers into how I perceive it, but it has depth if you want to seek it out.

The heart of the film is brother/sister bond, another strength of most of Flanagan’s works. There’s a care and interaction there that some folks simply cannot fictionalize, and it was delightful to see that represented on the screen.

While OCULUS is a stirring and expertly crafted film, my favorite part of watching it was my endless speculation as to the whats and whys and how it would be resolved. It’s a film that ignites your imagination, one that you’d walk out of a theater excitedly discussing the myriad possibilities of the film. The end result wasn’t as wild as where my mind went, but it was still extremely satisfying.