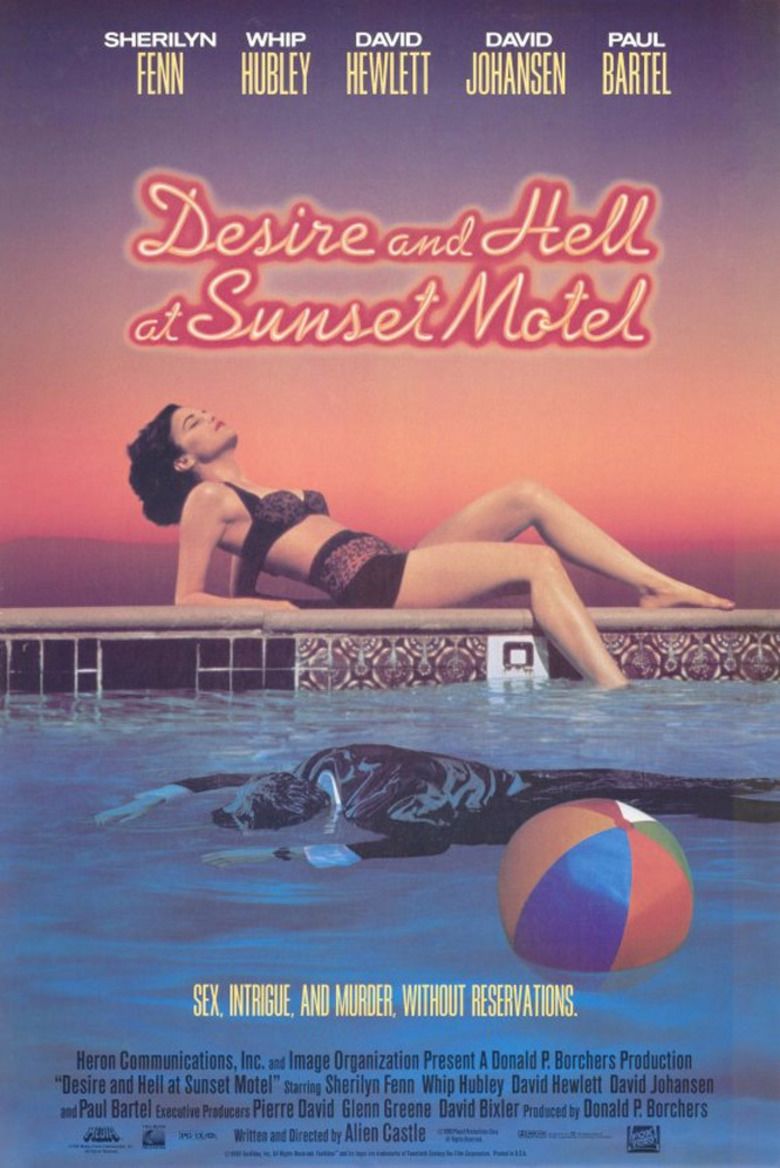 (YouTube) I caught DESIRE AND HELL AT SUNSET MOTEL (1991) as part of a triple Sherilyn Fenn feature during the recent David Lynch complete retrospective. While it conflicted with the last Swanberg Secret Screening at the Davis, I couldn’t resist — there’s only one print, and no one apart from the organizer of this retrospective will probably care enough about the film to jump through the hoops to screen it again. There are plenty of LaserDisc and VHS copies available via eBay (and a copy on YouTube if you look for it) but, apart from the home market, it went mostly unseen, and will probably continue to do so.

That’s a goddamn shame, because this is a wildly fun bit of throwback color noir, perfectly framed with beautiful blues all around that makes it ideal for the big screen, and it makes the most of Sherilyn Fenn’s abilities.

To summarize: husband and ‘small toy seller’ Chester (Whip Hubley) travels out for a company conference to California with his wife Bridey (Sherilyn Fenn), and stay at the Sunset Motel, managed by a leering voyeur (the always delightful Paul Bartel). Chester suspects that Bridey is cheating on him, so he hires someone known as Deadpan (CUBE’s David Hewlett) to shadow her while there. Meanwhile, Bridey has finagled a dude she’s lead along known as Auggie (David Johansen/Buster Poindexter) to meet her there to kill Chester with his own gun. Matters escalate, then completely fragment as Bridey’s memory starts to falter.

The story barely holds together and the dialogue is overly colorful in a way that almost feels like a parody of hard-boiled patois, but despite all that, it is a thrilling ride that leans into its frenzied plotting. However, it mostly succeeds because Fenn was born for these sort of retro-noir films, exuding danger and seduction not just with her stark hair and beauty mark, but her demeanor and poise; Ava Gardner reborn.