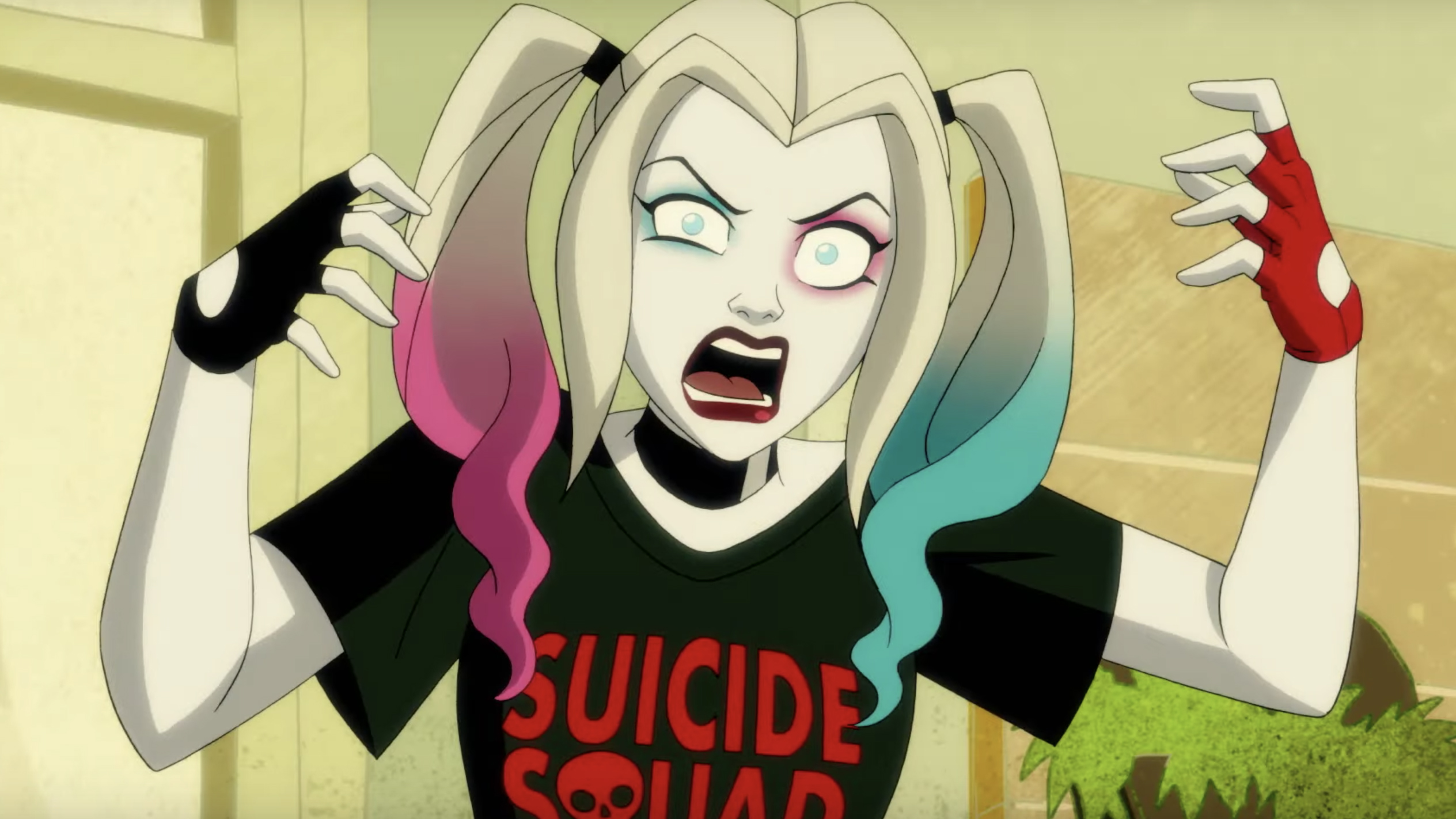 (HBO MAX) Despite being a pretty hardcore comic book nerd as a youth — I still have the long boxes to prove it — I never quite embraced comic book movies or TV. Apart from the occasional oddity like MYSTERY MEN or BIRDS OF PREY or THE SUICIDE SQUAD or LOKI or that one trauma-laden flashback episode of WANDAVISION, they’re rarely as weird or imaginative enough to keep my interest.

I’ve previously stated that I stayed away from comics for years because I thought they were just endless stories of people punching each other and, while I eventually found comics that consisted of something more that endless fight scenes — or at least used the fight sequences to communicate something larger — most of the MCU and DCU works consist solely of sexless, soulless, dull rope-a-dope tropes that exist solely to prop up future films; all sound and fury, signifying nothing. (Sorry, Will.)

This lead me to initially punt on the animated DC TV show HARLEY QUINN. Sure, BIRDS OF PREY was a sparky lark, and I ate up BATMAN: THE ANIMATED SERIES when it aired waaaay back in the day, but I assumed HARLEY QUINN would be just as defanged as most of its film brethren.

How wrong I was.

I don’t know how the fuck this show got made, but it’s such a filthy delight. The pilot itself is a marvel of a mission statement: it scrutinizes the toxic relationship between Harley and The Joker, sees her free herself from him (kind of) and discovers a new found family of D-list villains, including who I know to be her one-true-love, Poison Ivy.

It’s kinetic, it’s weird, it runs a mile a minute, it’s extraordinarily punk, and it’s unapologetically smutty but it’s always in service of the story. It’s an encapsulation of being liberated from live-action. It fully leans into all of the potential of animation, which given that most comic book movies nowadays are essentially an array of CGI sequences, you think there’d be more experimentation, but nope!

It also, just like LOKI, acknowledges that the characters are smart but completely askew. It literally features the following exchange from Harley to herself:

It ticks all of my boxes, and I haven’t even finished watching the first season yet. (So far, there are three seasons. I would not be surprised if HBO MAX shelved it, which is why I finally pulled the pin on watching it.)

JOKER: “You know she has HPV?”

BANE: “Most sexually active adults do.”

POISON IVY: “That potion makes people fall in love with me, and then kills them.”

POISON IVY: “YES! What did you think, you kite-fucking-freak? My name is Poison… Ivy!”

KITEMAN: “This is why I stick with the kites. So simple.”

HARLEY: “This is so fucked up, but weirdly moving.”

(Plays far better here than it did in FLASHFORWARD!)

HARLEY to IVY: “I can’t listen to ya when you’re dressed like a 40s housewife who is fucking her husband’s boss.”

“You are truly the Shakespeare of the sea!”

AQUAMAN: “I prefer to think of myself as the Dickens of the deep!”

HARLEY: “Oh, I did it! Although no one said I could run a crew!”

HARLEY: “Yeah, but you’re my friend, I mean, come on, it’s like when your mom says you’re the prettiest girl in school.”

HARLEY: “I just tried to touch myself! That is a stripper rule!”

To cap it all off, it has a banger of an intro/outro, one that I always have to fucking keep HBO MAX from skipping over because you can’t fucking prevent auto-play with HBO MAX.

This show brings me so much joy at a time in my life when I’ve desperately needed it — although it is worth nothing that S01E05 deals with trauma-centric disassociation that is not fun if you’ve lived through it, but is still excellently well-played. And if you have lived through it, well, you’ll feel seen.