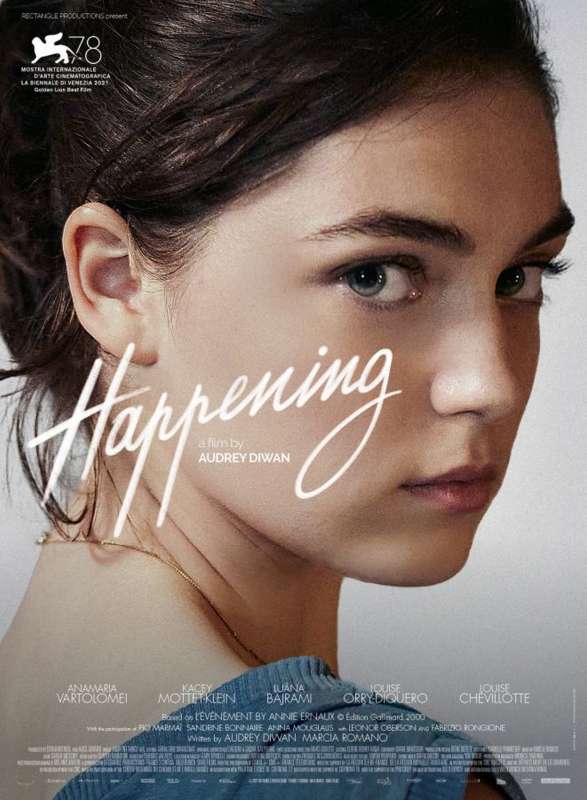 (Theaters only/VOD soon) Audrey Diwan’s HAPPENING (original French title: L’ÉVÉNEMENT), adapted fromAnnie Ernaux’s autobiography of the same name, may initially look like a slice-of-life character drama: It’s France in the early 60s and Anne (Anamaria Vartolomei) is a devoted student of literature, ready to buckle down and pass her final exams. Her parents are supportive, albeit overly industrious small bar owners and, after sunset, she enjoys a bit of the nightlife with her clique, while occasionally being glared at by her enemies.

In another film, that could be the opening of a quaint, comfortable ‘that one crazy summer’ movie. Not HAPPENING. Underneath its sun-washed gauzy palette of aqua blues and verdant greens is a tense, unwavering tale of a young woman under pressure as she realizes that she is pregnant in a country where abortion is outlawed and vehemently taboo. Anne is gravely aware of her ticking clock and she is determined to roll it back.

Anna gets to work and, as she goes from one failed plan to another, we see how her possibilities and her world shrinks. The already-tightly composed framing — shot in an 1.37 aspect ratio, closer to the boxed-in look of a standard definition TV show than a widescreen film — finds the camera inching closer in on Anna; rooms she inhabits feel smaller, more constrictive, she takes up more of the frame, her wide, defiant eyes inhabiting more and more of the screen. Her friends distance themselves, and those she talks to cower in fear of being jailed for simply hearing her broach the idea.

Anna’s solutions become more desperate, the world increasingly hostile to her escape attempt, and the camera refuses to flinch or turn away, brusquely displaying her efforts through longer and longer takes. Her strength and vitality wane, exhaustion sets in due to the strain of the clock, the machinations of her body draining her, and she finds herself more and more emotional drained by her time spent lurking in the shadows.

Yet, during all of this, Anna unwaveringly brandishes her physical desires with confidence. That detail helps to set HAPPENNING’s scope to that of a steadfastly look at an unjust twist in a singular person’s life as opposed to one part of a grander coming-of-age tale or a film consisting of well-meaning scare tactics.

HAPPENING is an affecting work that resonates past the France of the 1960s, a headstrong tale of individual survival. Diwan, who is open about having had an abortion, had the following to say about why she adapted L’ÉVÉNEMENT:

“Lots of people told me in the industry, ‘Why do you want to make the movie now, because we’re in France and we already have [a law legalizing abortion]?’ And I was like, ‘OK, I really hope that you’re going to ask the same question to the next filmmaker that comes to you and says they’re going to make a movie about World War II. Because I guess the war is over.’ It was not easy to have them understand. I mean, look at how many women died on that battlefield and tell me it’s not a war. It’s a silent war.”