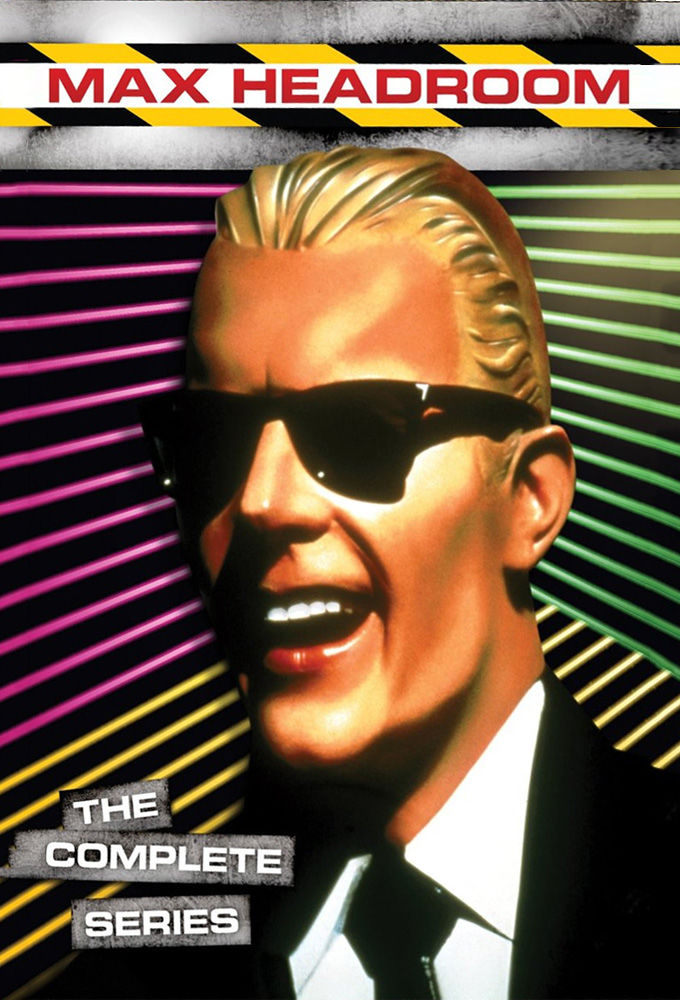 (DVD) I’m keeping this to my most memorable MAX HEADROOM ep, but I loved all of them. I know most folks are only familiar with the character Max Headroom (performed in extreme makeup by Matt Frewer, who doubles as televisual news journalist Edison Carter) from the Coke commercials, or maybe from pseudo-characters from satirical cartoons like DOONESBURY or BLOOM COUNTY.

If you’re of a certain age and watched TV, you can’t forget that brilliant neon-lined backdrop. If you aren’t familiar with the show: Edison Carter is an activist journalist for Network 23 in a cyberpunk near-future. When he’s almost killed upon doing legwork for an investigative story that involves Network 23’s potentially lethal blipverts, the network puts a hit out on him via a hacker, who triggers a parking garage lift as Edison’s trying to escape some cronies, and he flies face-first into a parking garage hazard sign with the words ‘MAX HEADROOM’. Said hacker then reconstructs Edison’s persona from a digital copy of Edison’s brain to continue non-Network 23-related reports for the network, and MAX HEADROOM is born. (Edison survives to tell the tale, but is now stuck with a sarcastic, extremely popular but very extreme digital copy of hisself.)

I didn’t grow up with the even-more-forgotten MAX HEADROOM late-night show that Frewer helmed in Australia, but I watched the TV movie via LaserDisc when I was a youth and it was enough of a revelation that I named our newly acquired yellow-and-black-striped cockatiel Max after the show.

(Yes, I grew up with birds and LaserDiscs, and rode horses. I fully realize now that my youth was off-kilter.)

There are more intriguing episodes of MAX HEADROOM, but -Dieities- is a very Cronenberg-ian episode of TV. It’s about televangelists and the falsity of ‘mind-storage’ (which is obviously self-reflexive, given his Max Headroom TV-centric AI persona). Oh, and there are a number of vaguely hidden riffs on Scientology. It’s especially high-concept for a show that repeatedly took big swings.

Unfortunately, it’s not available to stream anywhere, but the DVD box set is readily available. In lieu of a trailer, here’s a link to the TV film:

“Oh God, he’s been in the Dobie Gillis file again.” (A quote from -Dieties-, not from the pilot. As someone who saw a number of Dobie Gillis films in summer day camps, I felt very seen.)